My little brother’s name is James.  I wanted to name him Pete, but Mother and Daddy didn’t like that. “Where did you hear that name?”  Maybe he told me before he came to us from Heaven, but I didn’t tell them that.  I just shrugged and wondered why he couldn’t be Pete.   Mother says both our names come from the Bible and they both start with the letter “J” -James and Judith. Only they call me Judy so I guess I could call him Pete if I wanted to, but I won’t.  Not out loud, anyway. 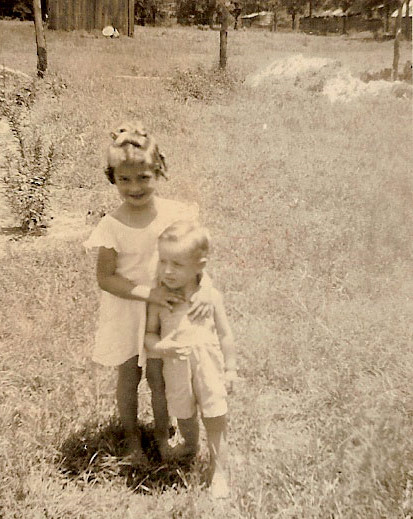 My little brother James is building a road for his little cars with the help of his dump truck.  We are playing in the cool morning shade of the house.   His dump truck is filled with sand scooped up with one of Mother’s metal spoons.  The dump truck is still shiny blue except for the few rust spots where the paint has worn away. The dump truck has a little seat on the top, just the right size for his little 3-year-old hiney,  but he’s too busy building roads to ride on the truck.  There was a thick wire handle attached to the front for steering, but right now he’s using it as a hammer to smooth away at the clumps of clay where the sand got washed off by the rain.. “Rood’n, rood’n” he says.  That’s what he thinks a dump truck sounds like.  “Rood’n, rood’n, rood’n” the dump truck gets louder as it climbs the little hill where another load of sand was dumped.

I’m busy making mud pies, like Nannie taught me.  I mix the sand and powdered clay with water in my little toy mixing bowl. I pack the mud into my little toy pan.  The mixing bowl and pan are part of a little toy cooking set I got for my third birthday.  It’s pretty fancy.  Besides the bowl and cooking pan I have a little toy egg beater with a red handle and a little rolling pin  Poor Nannie.  She only has coffee cans and mason jars to make her mud pies.  But she has lots of pretty flowers in her yard that we use to decorate the pies after they’ve baked.  And I have my very own pretties that I can use for decorating!  Yesterday when we went to get the cows, I filled my skirt with treasures!  I have three smooth acorns with the tops still on them, and two locust shells that were stuck to the tree, but I got them off without breaking any of their legs! And I found four shiny rocks by the creek!

I set my pie in the sun to bake. By tomorrow, if it doesn’t rain, it will be hard and I can gently take it out of the pan so as not to break it, and then I can put frosting on it.  Nannie gave me a piece of her old red brick that I can grind into a powder by rubbing it against a big rock, then mix it with water and spread it on top of the pie with Mother’s spoon. It surely makes a pretty frosting.

Mother only has four little spoons – one for each of us – and four big spoons that she uses to stir things, or to scoop mashed potatoes out of the big bowl.  We have four plates and four cups and four saucers.  My Aunt gave them to us because she didn’t need them any more and we did.  Mother is a little embarrassed because the dishes don’t match.  I like the bright yellow ones and James likes the blue ones.  Daddy gets the green ones and Mother gets the orange ones.  She says the dishes have a name and that’s “Fiesta” because Fiesta means “Happy!”  And they’re all happy colors so it doesn’t matter that they don’t match. Anyway, we don’t have company for dinner very often.  Our house is too little for company and anyway, where would they sit?  We only have three chairs and James’ high chair.

In the front room is where we sleep.  Mother and I sleep in the big bed on one side of the room and Daddy and James sleep in the other big bed.  In the winter we have a stove in the middle of the room.  Daddy gets up early in the morning and puts wood inside the stove and makes a fire and soon it’s warm enough that the rest of us can get out from under the heavy quilts and put our warm clothes on. I can stand close to the stove to make my clothes feel warmer, but not too close or I might burn myself.

I like to peek out the window when it’s cold because Jack Frost leaves pretty pictures on the glass while we’re sleeping.  If you blow your breath on the pictures they will melt into water that runs down the glass and ruins the other pretty pictures. I tried it a couple of times but decided I like the pretty pictures to stay as long as they will.  We can’t see him do it because of the quilts hanging in front of the windows.  But we have to have them because it would get too cold for us to sleep at night after the fire goes out. But in the summer Mother takes the quilts down and we can see outside again.  I have to stay inside a lot in the winter because I might get the croup.  Sometimes I cough so hard I can’t sleep so Mother puts liniment on a rag (it’s really one of James’ old diapers) and pins it around my neck with a big safety pin and it burns my eyes but feels good on my chest and I can breathe better, but I still have to sleep propped up with a pillow because if I lay down I’ll start coughing again.  Anyway if I run outside in the winter the cold air gives me the croup.

Our other room has a much bigger stove because it has to have room for Mother to cook our food. In the summer she has to go outside to get wood to build the fire in the cook stove, but in the winter we keep a pile inside so she doesn’t have to go out in the cold so early in the morning. One time in the winter, Daddy found a snake in the wood pile!  He must have brought it inside while it was sleeping, but when the room warmed up the snake woke up!  You can be sure he put that snake back outside where he belonged!

There’s a tall table by the back door where the water bucket goes.  Mother draws water out of the well to fill the big bucket.  Sometimes she lets me let the well bucket down the round pipe that goes down into the water. If you drop a little rock down the pipe you can hear it splash when it hits the water.  You can also holler down into the well and Little Sir Echo will answer you!  I have to be careful to hold tight on the rope because if it slips I’ll get splinters from the rope in my hands.  When the bucket is full it’s very heavy so Mother has to help me pull it back up.  Then we empty it into the house bucket and take it inside and put the dipper in it so we can get a cold drink of water whenever we’re thirsty.

This morning when Mother made biscuits and gravy for breakfast we had fresh butter that she churned yesterday and it was fun watching it melt into the hot biscuits.  it took a while for it to melt because it was in the ice box and the big block of ice that the ice man brought kept it nice and cool and fresh.

James has been using the spoon for a long time and I think it’s about my turn  “No!” he says.  “It’s my turn!”

“No!” I say.  “It’s my turn!” and I grab the spoon from his chubby little hand and right away start mixing my frosting.